Posted on December 31, 2013 by Joanellserraauthor 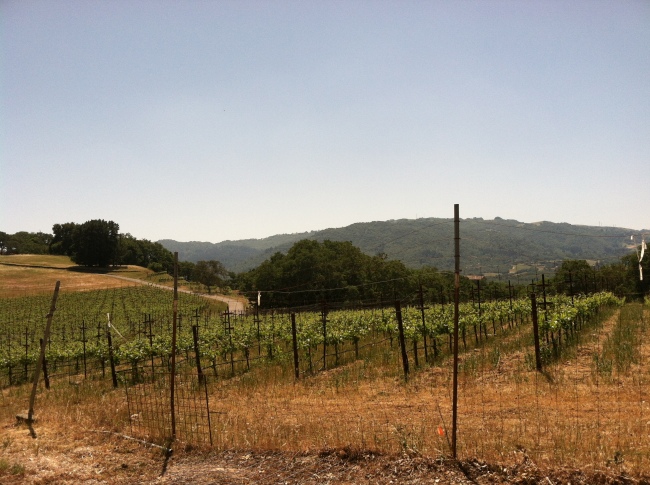 Last weekend I stumbled onto an awesome wine tasting room in downtown Sonoma.  Actually, I walked in.  I might have stumbled out. It turns out the owner is a screen-writer who has converted his commissions to an even sweeter vocation.

Had the owner been there, I would have had to give Mr. Kamen a talking to. The movie “Taken” is the reason my poor daughter, now 18, may never be allowed to travel alone. (Especially to Paris with a friend, which she recently asked about. Is she kidding? Did she not see that movie?!)

I personally traipsed all over Europe at 17, but there weren’t human trafficking thugs waiting at the airport in those days. Or maybe there were. Maybe they just steered clear because they knew I was from Jersey?

In any case, Mr. Kamen, has ruined many a night’s sleep for parents everywhere. It turns out he also gave us ample other seat grabbers, including Fifth Element (awesome movie) and even the Karate Kid, a pleasant, non-psychotic, childhood heart throb. I slept fine after that one.

Most importantly, Kamen’s Karate Kid earnings went to buying 280 acres in Sonoma in 1980. Yup, the man who ruined my daughter’s travel career owns the winery that makes the best cab I’ve had in years.  Maybe ever? Truly awesome wine. Think of tasting all the days of a Sonoma summer, and one long rainy night in front of the fireplace, with a delicious fall breeze at the end. Like a short story on your tongue. In one sip.

As a writer, it’s always encouraging to find a successful writer who made his mark and didn’t die trying.  The demise of many wonderful writers don’t make the writer’s life seem all that appealing. Emily Dickinson never got out. The Bronte sisters all died miserably young. Ernest Hemingway, Sylvia Plath –well, you know. Tough stuff.

But Mark Kamen’s life looks good to me: wine and words. His life story is pretty compelling to an East Coast girl whose life work is helping students go to college who were typically kept out (me). Kamen grew up in a city housing project in the Bronx and went on to earn a  Ph.D in American Studies from the University of Pennsylvania. That rocks.

Also I like his philosophy, which is quoted in the pretty little brochure they hand out: Robert believes everything happens for a reason, and yet nothing in his life was ever planned.

That’s not far from my own: Nothing in my life has gone as planned, but I’ll never stop making plans.

Here is my latest plan: Get my novel published. Make lots of money on it. Use the money to buy bottles of Kamen wines. Maybe I can even join his club! Use my overactive imagination to pretend I planted 280 acres of grapes and made this incredible wine myself. Drink the wine while writing another best seller. Repeat.

Thanks for the inspiration Mr. Kamen. And that awesome Cab. And the nightmares. The Cab is worth the night-mares, really. I think.

Did I mention that delicious, dry, Sauvignon Blanc? Thanks for that, too.

And by the way readers – there’s a Kamen wine called Writer’s Block. I’m buying that one first.

Happy New Year Folks. 2014 promises to be a good year. Wine and words.

My debut novel just released from Wido Publishing and on Amazon. Come see me at http://joanellserraauthor.com/
View all posts by Joanellserraauthor →
This entry was posted in Uncategorized and tagged Kamen, Screenplay, Sonoma, Taken, writing. Bookmark the permalink.