Posted on March 6, 2014 by Joanellserraauthor 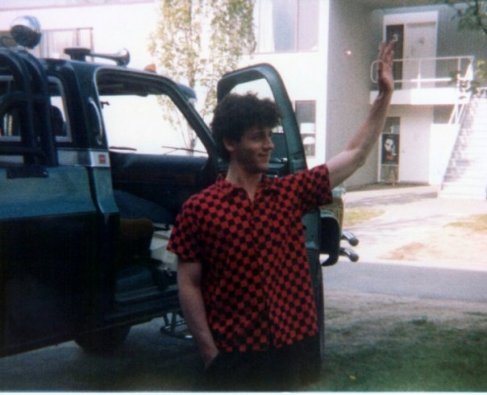 Steven’s voice is no different than when we were kids.

He says “Hey,” when I pick up the phone and I tumble back like a leaf in the wind.

Seventeen and waiting for him to pick me up. Me and my girls, bored and carless.

He’ll find the three of us girls here in lawn chairs, waiting for the sticky New Jersey heat to peel away so we can breathe.

Waiting to go out, waiting to get high and talk and curl up all together like cats under the stars.

Fifty? I say to him now. You’re turning fifty?

Which makes me not far behind.

Which makes me frighteningly close to the middle of a very long life.

Or tipped towards the end of the time span my parents were granted.

At least, that’s how the story goes.

We met as toddlers, our mothers told us, drinking their wine and telling stories.

Babies in the back of a PTA meeting. Or was it at the library?

An older, stronger child, he brandished a weapon, his toy statue of the Empire State Building. Fortunately, I was hard headed, even then. I don’t remember the event.

I hold no grudge.

We danced around each other for years in childhood, offering only subtle nods in the fierce social shark tank of middle school, but plunked down together at the children’s table at family dinners.

And we watched from the side, learning that the middle of life can be a time of deep amusement.

If even in the face of occasional tragedy.

I loved to watch them laugh.

And listen to the banter, the theatrical retelling of stories, the literary references, quick witted puns, and occasional bursts into Broadway tunes.

I drank it up: their mutual love of New York, each other’s children, the lives they’d carved out for themselves, their friendship.

We sprung from these nests as artists, Steven and I.

A painter. A writer.

Chose opposite ends of the country for our abodes, and the demands of life and miles between us broke the continuity of our companionship.

I no longer see him pulling around the corner, cigarettes hidden in the glove compartment, sporting one bold earring and prepared with a joke for my father.

But still the phone rings. My friend is on the other end. He says “Hey.”

And I am home.

My debut novel just released from Wido Publishing and on Amazon. Come see me at http://joanellserraauthor.com/
View all posts by Joanellserraauthor →
This entry was posted in Uncategorized and tagged Fifty, Friendship, New Jersey. Bookmark the permalink.

1 Response to Wake Up Call