Posted on November 2, 2015 by Joanellserraauthor 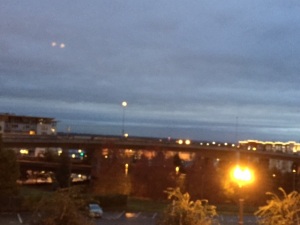 Early morning, I rise, knowing it is time.

Before my tea has even steeped.

Before the sun has pulled itself from the mucky clouds of the east, and stretched across the sky to wake the world, including the daughter that slumbers beside me.

A hotel room far from home, in the wet world known as the Northwest, I consider moving deeper under the covers. Hiding from my own demanding self.

Life is a series of such struggles. The tide of my own resistance is higher and wider than Puget Sound’s.

My dreams, a jumbled confusion of lost love and found objects, float vaguely in the room. My unconscious and conscious drift together like marbled smoke.

Sleep rubbed from my eyes, I examine the murky darkness for a hint of inspiration.

I cannot consider the day ahead of me: Doctor’s appointments, long drives in wet traffic, a curbside, tearful, goodbye. Rental car rudeness, stale air in the airport, the awkward airplane conversations. Another long drive in the rain, now dark. Some days are better not to consider ahead of time.

Inhabit the advice of so many prolific writers, to put my gaze on a blank page in the morning, not on the world.

Summon my compadres from Squaw, who might be staring at their own blank page.

The few who post the sunrise pictures daily, to remind the world: They have arisen, and face the day with pen in hand.

Imagine the writers everywhere who are leaping into this day, with its many fictional possibilities, pushing back on life’s mundane demands like mud from a long wet land slide.

The poet who scribbles words on a napkin in a diner in Des Moines.

The novelist ripping out pages of that do not serve the plot. Grieving the scenes she eviscerates.

The journalist digging for a fresh take on a weary problem, for the image that will shake his readers’ complacency.

My daughter who produced fresh prose effortlessly, like breathing, before she collapsed here next to me. Whose feet are still tangled in the sheets next to mine.

Summon them all to begin the hardest task of all.

The only task that matters.

1 Response to Wake me, Muse.