Posted on February 16, 2017 by Joanellserraauthor 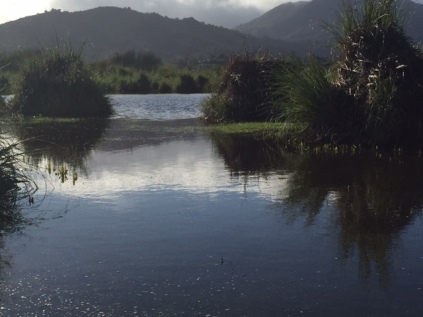 My dogs ran away one hazy afternoon, when I’d headed out for a consoling long walk through the marshes. I bent down to tie my shoe, and cell phone fell to the ground. I reached for it, placing the leashes on the ground next to me, at the same moment a random hare bounded by. I noted the strength and ferocity of his springing legs.

My shepherd mama and her daughter were off, running like they were race dogs and the shot had been fired.

I screamed for them to stop.

Mama dog didn’t turn. The puppy glanced back at me, her eyes seeming to say, sorry, but hell man it’s a rabbit. Their tails wagged as they plunged into the high brush. The marsh is a beautiful but eerie bird protection area stuck between a dubious part of the San Francisco bay and a highway. I watched the tall grasses move as the rabbit, and then the dogs, disappeared.

This area is both totally public and yet uncomfortably creepy. The mud sucks at your feet, there is random debris peeking out from the bushes – wet blankets, condoms, bottles – and it is full of places a psycho might hide. I never worry about the pyschos when I walk here, because I have my dogs.

Only now I didn’t.

That’s ok, I told myself, the sun was peeking in and out of the clouds, and I had hours before my next appointment. I would find them in a minute. Or a few.

I jogged down the main wide path, and then smaller, less trodden ones, yelling the dogs’ names until my throat grew dry.

I refused to think about all the worries that had sent me out for a long walk in the first place: some of the people I loved were hurting, and others were dying. We had real estate woes and career blahs, and a mundane to-do list a mile long. My car had no oil, my hip no lubricant, and my novel remained un-edited. Most of all, a frightening series of political events had led to the rapid decline of our civil liberties.

No, I would focus on finding my dogs.

A half hour in, the sky opened, rain descending across the marsh in sheets.

It’s Ok, I reassured myself as the cold water slipped down my collar. You’ve been soaking wet before and so have the dogs. Just keep going. My yells were dampened with the rain, they would never hear me.

After an hour, I found the pup, tangled in a tree, crying. She squealed and licked my cheeks as I untangled her leash and led her out. If she knew where her mother had gone to, she wasn’t talking. She pulled me towards the car.

Another hours later, still searching, I questioned for the first time if I would ever see the Mama dog, Cora, again.  She’d always had a wild streak. She’d been rescued from a field outside of Fresno when we adopted her. Maybe she had decided to return to her roots? I pictured her hitch hiking up 101, her ears cocked for a good ride.

She is also a ridiculously friendly dog to humans. She looks like Kujo, but if a burglar came to the house she might lick him to death. Perhaps she had gotten acquainted with one of the homeless folks from the marsh, and headed off for a more transient life? I could accept that scenario, if I just knew she was OK. I prayed. I bargained with God. I made a list of the reasons he owed me. I took it back, and pled my case differently, with less arrogance. I threw out a call to my angels, to Alla, Shira, and Mother Marie. I try to keep in touch with all of them, play my odds. But no-one answered.

Eventually, I took the pup home. She was wet and tired, hungry and dismayed. So was I.

I returned to the marsh alone to renew my search in the late afternoon. The rain had abated, but my voice couldn’t seem to project anymore, my throat too dry and sore. A small cold had blossomed into a flu-like event over the course of the day, and each step took effort. I imagined being on a Nyquil commercial, drinking a magic potion and being put to bed. My head throbbed and my fingers grew numb.

At one point. I heard a bark in the distance that I was sure was my dog Cora’s, distinct amongst the other dog barks. I ran towards it, elated. But of course the paths were muddy as shit.

Have you ever fallen into the cold black watery mud of a marsh? It’s quick sand, only colder, and it smells like farts of a rhino that ate rotten eggs. The slime threatens to consume you, leaving not a trace.

I scraped, clamored and yanked myself up.  My joints ached.  My arms seemed almost futile. Where was that upper body strength the yoga teacher promised? I found a stump and used it to pull myself out, slowly, my back covered in black sludge.

I lied on the ground, recovering. The sky was doing the beautiful thing it does in the winter, after a rain. Pink and purple clouds shifted across the dusky blue background, like dancers in gorgeous dresses, flirting with the sinking sun on one side, the rising moon on the other.  I stayed still. I watched.

I decided not to cry about my worries over my children, our lack of a housing plan, our president, my clients hard lives, my throbbing knee, and most of all my missing dog. I would not to get up either.  I watched the sky like it was the best show in town, which it was. When it grew dark, I finally gave up, and walked my wet ass back to the car.

I went home and did what I had to do: fed the pup again, took a shower, took a client call. I kept in touch with the police, the humane society, and the family. I prepared for the worst, and let the pup fall asleep on my chest, both of us scared.

Eventually, my phone rang. Did I have a dog named Cora? She had wandered into Cost Plus, and the staff were a little worried about her.

“She’s real cold, and she looks like she sure misses you.”

She better, I thought. Little fucker.

Here’s a picture of my girl, waiting in the store while I high tailed it over there.

Back in the car, Cora shaking in the front seat next to me, I finally cried. She leaned over and licked my tears, remorseful. I took her home.

Here’s my life lesson. When you think everything sucks, it probably does. But tilt your head up anyway, and take note of the world’s beauty.

Be present for the sky, the sun, the rain, the clouds and the darkness. Get out of your own head.

If you don’t, the universe will knock you on your ass, dip you in mud, and leave you feverish on the banks of the river, until you open your eyes and pay attention.

Life Lesson #2. Don’t put down the leash, even for a second, in rabbit territory.

4 Responses to Falling into quicksand.